The Forest of Arden


The part of Warwickshire North-West of the river Avon was the old Forest of Arden.

The name still occurs in the several place names in the region: Hampton-in-Arden and Henley-in-Arden.

Much of the Forest of Arden was cleared during the Middle Ages, and some of it earlier. By the time of Domesday, 1086, about 35% of North West Warwickshire is known to have been wooded.

Despite clearance, the entire area today still retains a wooded character. Everywhere can be seen oak trees, in small copses, in hedgerows, or marking places where hedgerows have been.

Some useful evidence comes to us in the form of Anglo-Saxon place names.

The names of many villages in the Arden area end with "ley" or "leigh", a Saxon suffix meaning "woodland clearing", and these settlements may have been cleared in Saxon times.

There are some 85 such place names in Warwickshire, almost all within the Forest of Arden area. The name is rare in Warwickshire outside the Arden region (only 4 occurences outside).

A "leah" could be either a man-made clearing, or a natural glade or open space. Some place names are based on the name of a family, but many have simple woodland meanings. Here are a few:

Such place names are evident in the three photos above, which were taken at Crack-ley, Stone-leigh, and Baddes-ley. And also in the photo right, taken near Hen-ley.

Virtually no Roman roads cross the region. It has been suggested that this was due to the difficulty of building roads through woodland.

The dominant tree in the Arden area of Warwickshire is oak. In some villages approximately 90% of the large trees are oaks.

The subsoil here is a generally a heavy deep clay. Digging a small hole, after about 9 inches down will hit clay, which is what oaks like, and many other trees don't. This heavy clay soil is less favourable to agriculture and so was less susceptible to being cleared for farmland.


The Geology of the Area 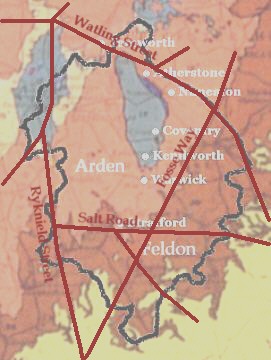 The Arden area is effectively bounded by Roman roads (shown in red on this map), the Fosse Way on the East side, and the Salt Road along the Southern boundary.

The area of the Forest of Arden correlates with an area of underlying Mercia Mudstone (shown in light brown) and Carboniferous Sandstones (grey). Sherwood Forest lies 40 miles to the North, on the same band of Mercia Mudstone, which forms a narrow arc across England.

The contrasting area of Warwickshire South-East of the Avon consists of much more open countryside. This overlays a band of Jurassic Lias Clay soils (shown in dark brown). In contrast to the Arden, the South-East area of Warwickshire is traditionally known as Feldon. The historian Dugdale speaks of the Avon dividing the "wooded part" from the Feldon.

In Shakespeare's mind the woodland imagary would have come from his local wood. Shakespeare seems to have compared Arden with the Biblical Eden. The idylic ife inside the forest contrasts with the "fallen" world outside the forest. There are several allusions to the Biblical story in the play. The Forest is a magical place, where strange coincidences occur, strange apparitions appear, and where people are transformed through self-discovery, or by finding love.


Modern Regeneration of Forest of Arden 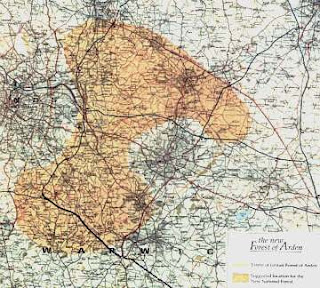 In 1989, the UK Countryside Commision were investigating the possibility of creating a new National Forest. The combined local authorities of the Warwickshire area proposed a plan to regenerate the Forest of Arden. This map, from their proposal document, shows the proposed area of the new forest. This would have been similar to the area of the original forest, with the exceptions that the City of Coventry, and the Eastern perimeter of Birmingham, which did lie within the old forest, would have been excluded from the new forest. The new forest would not have extended South beyond Warwick. This is not a plan to introduce wall-to-wall forest, but to increase the proportion of land under woodland. The plan would have involved planting 150 million trees, including a high proportion of oak, in the area. For various political and economic reasons, no progress has been made to accomplish this.

The ecological values of trees can be measured by the number of different insects they host. Oak hosts 284 species; followed by willow (266); birch (229) and blackthorn (149). Sweet and horse chestnuts are popular as specimen trees on village greens in Warwickshire, but are foreign imports. Horse chestnut was introduced, in the 16th century from Turkey, and only hosts 4 insects.

The dominant tree in the Arden area of Warwickshire is oak. Silver birch is common (the 2nd most common tree in English woodlands) and grows very quickly. Ground left open here will first be covered by bramble and birch, and then, as oak grows up through and over it, the oak takes over. Elm used to be common in Warwickshire hedgerows, but was mainly wiped out by Dutch Elm disease about 10 years ago.

During the last ice age, 12,000 years ago, there were no trees at all across England. At the end of the ice age, trees began to move northwards from Southern Europe. 5,000 years ago, England was largely covered by wildwood. Pollen analysis shows that the commonest tree, throughout central and southern England was the lime.

Much of the extensive natural woodland covering of England was cleared in pre-Roman times. By the time of the Norman Conquest only around 15% of England remained wooded. Substantial areas of woodland remained in Warwickshire and Middlesex. These pre-Norman woodlands were not deserted wall-to-wall-forest, but contained within them clearings, natural and man-made, and thriving communities, raising pigs and other livestock, and sustainable harvesting of timber for building and for charcoal.

1066 - Norman Conquest. The Norman Kings wished to claim large areas of woodland for sport, and introduced the concept of Royal Forest. These designated areas included both wood, meadow and farmland. About 25% of England was brought under "Forest Law", with severe penalties for poaching the King's game.

In the 12th Century the Royal Forests became means for raising money, though fines and other mechanisms. Nobilty could buy leases from the Crown to farm areas of the Forest.

By the 16th Century English Kings had ambitions for national power and independence particularly against Catholic Spain. This demanded charcoal for iron, and timber for shipbuilding. The tanning of leather required the use of oak bark, which was another major demand specifically for oak. Large areas of forest were sold to enterprising nobility. A third of the entire Forest of Dean was felled in one year.

The 17th Century marked England's rise as a seafaring nation. To build a single large warship required 2,000 mature oaks. Only 12% of England remained wooded, and declining woodland became cause for concern. Within 80 years the number of oaks in Sherwood Forest alone had dwindled from 23,000 to 1,300.

Towns, Villages and Attractions featured on this blog